Getting off the couch, wandering Highland Park and Grand Avenue and lunch at Punch

This morning, Michelle and I got up close to the regular time (we're trying something new, and actually getting up early on weekends) and decided to start the Couch Potato to 5k program from CoolRunning. I finally tried out the Polar heart rate monitor that Kirk gave me when he got a fancy new one. It's pretty much idiot proof, but lacking in some basic functionality. You set it for a minimum and maximum rate for your workout zone, then decide if you want it to annoy you by beeping at your when you're below or above the zone. Needless to say, I shut that off. Once you begin your workout, you simply hit the only button it has once to begin your workout, then hit it when you're done. It then gives you your time of workout and the average heart rate. Very basic. I also use the Nike+iPod trainer. That thing is awesome. I have the iPod mini from two versions ago, so it works really well for this, but the armband that fits that style doesn't allow you to see the face, so it makes it tough to use for the running program we're doing, since you need to be able to see the timing. I figured that wouldn't be a problem since I was wearing the watch for the heart rate monitor, but that only shows your heart rate while you run, not the timing. That caused a bit of an issue since I couldn't see the timer for 60 seconds of jogging and 90 seconds of walking. I abandoned the armband and just held the iPod in my hand to watch the timer on it. Next time Michelle is going to wear the heart rate monitor so she can give it a try, and I'm going to find a running watch with interval timing. All in all though, it wasn't a bad morning. Unfortunately there was absolutely no breeze this morning, so it was a bit stuffy and muggy on the run, but not ridiculously hot. Could have been better, could have been worse.

After the run, Michelle had breakfast plans with Gosia and Julie. She hasn't seen Julie for over 18 months (she just moved back from Baltimore) and with Gosia living in Appleton, she doesn't get to see her nearly as much as they would all like. It was great for her to get to hangout with her college friends again. I wish they all lived here so Michelle could have that girlfriend time. It was really nice to see her happy and talking with them. Of course, Gosia's pregnant and Julie has an 18 month old, so there was a lot of baby talk. Yet more pressure!!!

While she was breakfasting with the girls, I headed over to Fish Ave (66th Street in Richfield, the location of World of Fish and Something Fishy), to pick up 10 gallons of R/O water and 5 gallons of salt water as well as some Forumla Two and Prime Reef for my fishies. Something Fishy had Formula Two on sale, buy one get one free, so I saved myself $5.99! While there, I saw an absolutely beautiful silver arowana. It's odd that Something Fishy would have a large freshwater like that, but this thing was something special. It had to have been at least 28" long and was in pristine condition. Needless to say, it had a hefty price tag at $299. Mike would have died. His arowana isn't nearly that size yet, but with time, and considering it lives in a 310 gallon aquarium, it definitely has a chance to get there.

After they were done, I met Michelle and Gosia at the Starbucks attached to Barnes & Noble in Highland Park. We talked for a bit, then she headed off to register at Babies R' Us. We decided to walk around Highland Park, and check out Patina before lunching at Punch. Michelle loves Patina. It's a very eclectic shop with a very wide assortment of gifts, knick-knacks, decorations, etc. We walked in and were immediately drawn in by the "Pretty Useful Tools" line by the V&A Museum. Now, the V&A was the one thing we definitely missed when we were in London. Michelle's still kinda bitter about it. Now, with her affinity for design and all things "period", that museum would have been outstanding for her. These tools were right up her alley. A tape measure covered in a William Morris wallpaper design from 1837, stuff like that. They definitely screamed "Michelle."

After picking up Erin's birthday gift at Patina (something eclectic and very, very cool for the new homeowner and soon to be newlywed), we walked down to Punch for lunch. Punch has, by far, the best pizza in town. There isn't even a close second. I had never been to the one in Highland Park, the original. I guess I never realized that this one was table service instead of cafeteria style service, so I was a bit confused off the bat and probably looked like an idiot, trying to find the line. 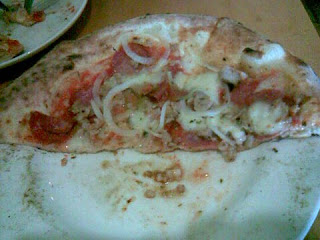 Once we were situated in our seats, and since Michelle had breakfast about 90 minutes prior, we figured one pizza would suffice. Typically we get a pizza and a salad to share or we each get our own. However, this time we settled on the Bruni (sausage, spiced salami, onion, oregano).

It was fantastic as always. Thin crust, baked in a wood-fire oven at 800 degrees for 90 seconds is just the way all pizza should be prepared. The edge had a nice char on it, the pizza was a bubbly, melty, ooze in the middle and the salami was crisp on the edges and perfectly placed. I adore Punch.

After lunch, we headed over the Grand Ave. to see what there was to see. Frankly, we didn't feel like walking around much, but I hadn't had my Grand Ole Creamery fill this summer, so we drove down Grand, parked and walked up to the familiar door. Shockingly, there was no line out the door on a lovely, warm St. Paul Satuday. Michelle tried something new and went for the Strawberry Lemonade Sorbet while I had the tried and true Black Hills Gold. Michelle's sorbet was light and tart. Frankly, it was perfect for a sunny, 85 degree day. My cone was creamy heaven. Seriously, it's the best ice cream I have ever tasted.

We then walked around the block, eating our ice cream and drooling over houses in Crocus Hill. WANT. After we finished our cones, we headed toward Golden Fig Fine Foods. I love that store. It's filled with all kinds of locally made gourmet products (mustards, oil infusions, organic pretzels, chips, breads, chocolates, etc) and locally grown/prepared eggs, meats and cheeses. They had fantastic looking pepper bacon, pork tenderloins and dry aged steaks. Today, however, I was in the mood for something a bit lighter. We decided upon a levain from Rustica and black bean and corn MinneSalsa.

After we left the Golden Fig, we decided to call it a day and head home. All in all, it was a fantastic day and we were home by 3:00. I kinda like this getting up early thing.

Email ThisBlogThis!Share to TwitterShare to FacebookShare to Pinterest
Labels: Exercise, food and drink