Last night, for the summer birthday celebration with my beautiful wife, my mom and dad, grandma and Marcia, we had dinner at Erte in Northeast Minneapolis.

Let me preface this by saying that the pictures aren't fantastic. It was dark, and Michelle's iPhone doesn't have a flash. I didn't want to be rude by using the regular camera with the flash. 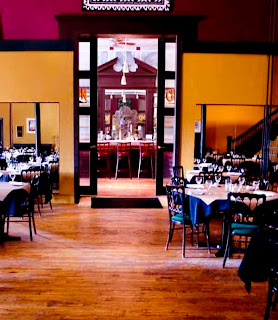 First, the space was beautiful in its simplicity. Nothing overdone, it was a nice sized room with exceptionally high ceilings. While it made for a pleasing visual aesthetic, combined with the hardwood flooring and plaster walls, it made the room very, very loud. Every sound reverberated throughout the room. While every typical restaurant noise is amplified in this setup, when you combine the live music Erte has every Friday night and we literally could not be heard across the table without yelling. Last night was an acoustic trio named treVeld, playing from their debut album, Bohemian Flats - ["Bohemian Flats is treVeld’s debut recording, which draws upon several musical sources and traditions, including Gypsy, Swing, Old Time, Celtic, Bluegrass, Blues, Chamber and Nordic Roots."] (they were excellent, by the way.) 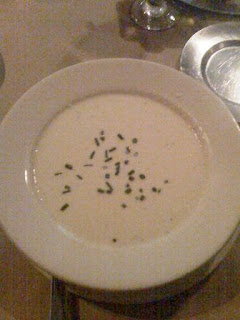 Let me start by saying that I was a vichyssoise virgin. Last night I popped my cold soup cherry, and I will never be the same.

The first bite was ... weird. The flavor and texture were outstanding. A wonderfully creamy potato puree with a hint of sweet pear on the top. Upon a second taste I noticed two distinct textures within the soup. There were finer grains of the pureed potato but was more interesting was the almost gritty nature of the pureed pear. Combine that with flavors of caramelized onion and nutmeg, and it was a very nice complement to the sweetness of the pear.

However, there was still the oddity of eating cold soup. After five or six spoonfuls I got used to the idea and quite enjoyed it. Michelle, on the other hand, looked as if she put crickets in her mouth. She could not deal with the weird feeling of cold soup. 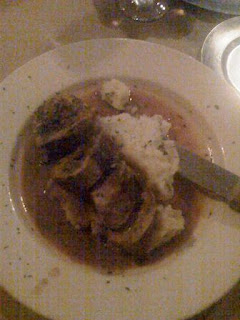 Now, I don't know about you, but when I think porketta, I think of that nasty green herb and fennel encrusted crap sitting in the display rack of deli. It always looked out of place, and as if nobody ever ordered it. I'm just going to go ahead and imagine that it tastes absolutely nothing like this at all. In any way. Ever.

This was fantastic. A wonderfully prepared pork loin, wrapped around hand ground, cured, spiced, crumbled and fried sausage. This was then sliced and placed on top of hand mashed sour cream and chive potatoes (none of that reconstituted Sysco crap here folks) then drizzled with a gravy made of the drippings.

The dish was perfectly spiced, the pork wasn't tough or dry in the least and the sausage didn't overpower the entire dish. 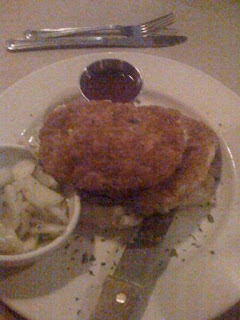 Michelle wasn't a huge fan, thought it was a bit on the greasy side, which would belie it's name as "faux fried", and considering it was grilled, I was a bit surprised. However, the emulsifier used to adhere the cornflake crumbs to the breast was likely clarified butter, and did leave a residue on the plate. However, I thought it was outstanding, and the portion was closer to something you'd find at a chain, rather than a chef-owned place. The pickles were horrible, but I'm not a bread and butter pickle fan at all. 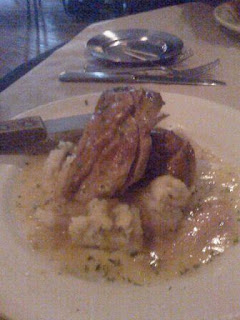 Michelle doesn't eat duck, and typically I find duck to be too fatty and gamey for me, but this was more delicate than most duck. Must be something to do with the organic nature of the ducks. Mom loved it.

Dad's entree: Some broiled sea bass dish that he traded with Grandma. It was not good. Nobody liked it. It was one of the daily specials.

This was fantastic. Grandma didn't like it and (as previously mentioned) traded for the nasty fish. The brisket might have been the best dish on the table. One didn't need to actually chew the meat, it simply entered your mouth and immediately was broken down by the copious amount of saliva produced by the scent of the beef. Very good portion size, Dad took home over half of it.

Coulotte cut sirloin. If you are expecting a steak that looks like it came from Cub or Super Target, don't. Coulotte cut looks closer to the actual loin than it does a typical sirloin steak in an American butcher.

This steak was fantastic. Delicate texture with a very hearty, beefy flavor. 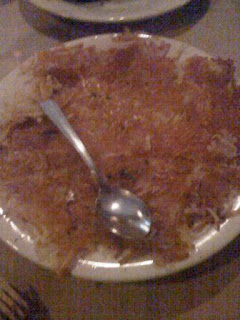 I only had a taste due to the new meds, but it was a good pinot noir. Nicely balanced and not too tannic. I will try it again.