Saturday for lunch, Mike and Erika invited me to join them, as Michelle was off with Chuck in search of green home building products of some type.

Mike wanted pizza, Erika wanted salad and I just didn't really care that much. Old Chicago was conveniently located and would fill the varied tastes of the three of us. 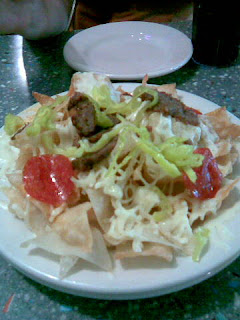 As is typical, we started with a half order of Italian nachos. Now, these aren't anything overly special, however they never disappoint. Pasta chips, topped with italian sausage, pepperoni, pepperoncini and mozzarella served with marinara on the side. Always satisfying, and can easily make a meal on their own.

While Mike ordered the personal-sized Meat Me with Chicago-style crust and Erika chose the house salad with raspberry vinaigrette, I decided to peruse the special summer menu for my luncheon.

I decided upon the buffalo chicken hoagie. Now, typically I like most anything buffalo chicken, and like Joey Tribbiani, I am a fan of the sandwich. So, I figured mixing the two would be a safe bet. Gladly, I wasn't mistaken. 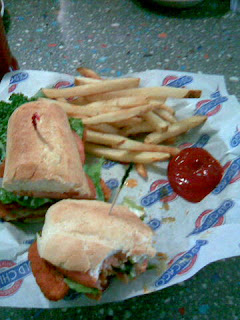 Comprised of what appeared to be three reasonably sized chicken tenders, battered and fried before being slathered with a buffalo chicken sauce, placed betwixt two halves of a surprisingly nice hoagie roll (with a nice crust and toasted on a salamander) then topped with a blue cheese sauce and tomato slices, served with a side of fries.

Old Chicago's fries are middle of the road. I'm guessing they're a Sysco product (like most of their food), but at least they tend to be decently seasoned and crispy.

The chicken part of the sandwich was actually quite tasty. The chicken wasn't stringy, wasn't fatty, wasn't overly done, but could have used a bit more heat in the buffalo sauce. The tomato slices, however, were terrible. Mealy and unripe, they were virtually inedible.

Frankly, for a chain restaurant lunch, it was middle of the road. I'd get the sandwich again.